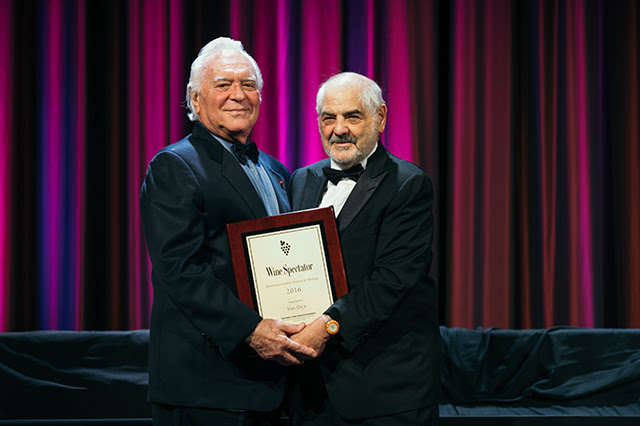 Dick has been a leading figure in the wine business for nearly six decades, and has spent more than 40 years building Southern Wine & Spirits’ wine unit into an unparalleled force.

When Dick joined Southern as general sales manager of the distributor’s wine division in 1969, the unit’s annual sales were less than $900,000. As president of the wine division of the recently-formed Southern Glazer’s Wine and Spirits, Dick now heads an operation with sales in excess of $6 billion.

“What Robert Mondavi and Ernest Gallo were to wine production, Mel Dick has been to wine distribution. A giant in the field,” said M. Shanken Communications chairman Marvin R. Shanken in presenting the award.

Not long after Dick was honored, the wine industry’s signature event closed on an even higher note, as Huey Lewis and the News took the stage, wowing the crowd with their vast array of hits from years past. Then, in a surprise appearance that thrilled the audience, rock legend Sting joined Lewis for a song, following up on an acoustic number he performed earlier in the day during the Wine Experience’s afternoon seminar.

Wine Spectator’s 2017 New York Wine Experience will be held from October 19-21 at the Marriott Marquis. Tickets go on sale in February.

Subscribe to Shanken News Daily’s Email Newsletter, delivered to your inbox each morning.

GET YOUR FIRST LOOK AT 2021 DATA AND 2022 PROJECTIONS FOR THE WINE AND SPIRITS INDUSTRIES. ORDER YOUR 2022 IMPACT DATABANK REPORTS. CLICK HERE.